Truffles, Truffle hunting and Truffle markets in Lot and Quercy 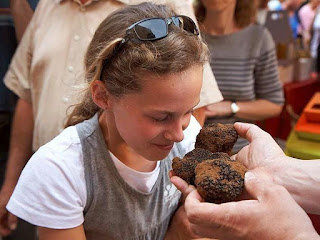 As you wander through the woodlands of the Lot département under your feet may be the so called 'black diamonds' of the culinary world - Truffles!

The limestone soils coupled with the hot dry summers are ideal for the truffle, and throughout the Quercy and Périgord region truffles can be found, with the best areas being on the Causse de Quercy where there are important truffle markets in the season.

There are demonstrations and visitors centres dedicated to truffles that Halcyon Leisure guests can enjoy.

Helping you get the best from your holiday home

If you want to know more about what to expect when you rent a house in France with a pool.... or if you are currently in a house and need information or advice, the Halcyon Leisure FAQ Knowledge Base is here to help you.

Richard the Lion Heart and Eleanor of Aquitaine 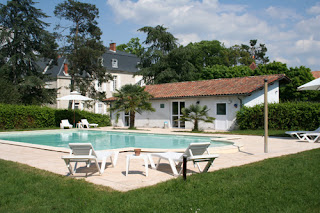 At Gîtes Le Manoir ( Property refs 51-56) the gîtes all carry the names of people connected with local history, and among them are Richard Coeur de Lion and Alienor d'Aquitaine - Names known in their English forms (Richard the Lion Heart and Eleanor of Aquitaine) to even the least studious English pupils. So who were they, and what is the connection?

'Causse' is not a word that will often be encountered in UK GCSE French, or indeed 'A' Level French, but any traveller with any lateral view in the departements of Lot, Lot-et-Garonne and Tarn-et-Garonne will undoubtedly notice it on maps.  So rare is it that it is not even included in the online version of Collins English/French dictionary.

Wikipedia however comes to the rescue - The word came into modern French from the Occitan language, (an ancient language of eastern France, northern Italy and parts of Switzerland). Causse defines an area of level limestone landscape, so a Causse will sit comfortably with the Karst landscapes of the Balkan countries, the Burren in Co Claire, Ireland and parts of the UK such as the Mendip Hills of north Somerset.

The patron saint of France

With 'Paddy's Day' (St Patrick's Day, March 17th) upon us this week, and the patron saints of the constituent parts of the UK well known (Saints Andrew, George and David) we take a look at the Patron saints of France.

Yes - Saints plural! There are several with varied claims, and further than that, most villages, towns and cities also have their own nominated patron saints, so there is an interesting debate as to who is right and wrong wherever you travel.

This week we look at Les Plus Beaux Villages de France, and what it means, 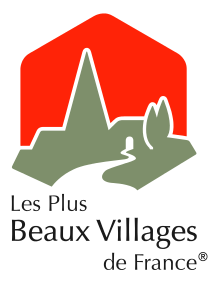 Les Plus Beaux Villages began as recently as 1982 as a loosely bound association of around 60 French villages whose stated aims included promotion of their history and heritage, and the avoidance of 'certain pitfalls' including soul less museums and amusement parks.

The Association now embraces 153 villages throughout France, and this includes the villages of Auvillar, Bruniquel, Lauzerte, Monflanquin, Monpazier, Pujols-le-haut and St Cirq Lapopie, being the villages closest to the area where Halcyon Leisure properties are situated.( the departments of Lot, Lot-et-Garonne and Tarn-et-Garonne: Monflanquin is in Dordogne, but will be a familiar name to those driving south from Bergerac) 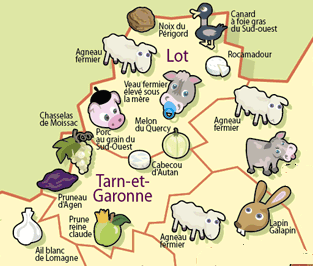 The land between the Lot, Garonne and Tarn rivers is a true cornucopia for food enthusiasts, with the rolling landscape providing differing soil types for a wide range of foods to be produced. This post describes what and where to look for.

Vineyards and wineries are liberally spread throughout the area, with a good concentration along the Lot producing the fine Cahors AOC wines that are famed throughout the world. Many wineries are open for tastings and direct purchase, and are often based in Chateaux and manoirs. Often they have wider product offerings - for example Domaine du Garinet at le Boulvé near Tournon d'Agenais where they also produce plums for prune products, and also walnuts for oils and other products.... including baked products which are often sold at the local markets.